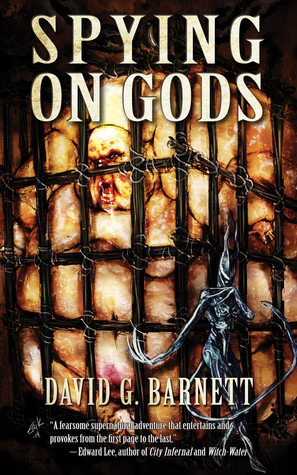 This is the cover O.O

A drunken, naked frenzy leads to a nightmare summoned to earth. A nightmare not meant to be witnessed by human eyes. Because if it is, the village will pay, and pay it does.

When the villagers find a broken man on the forest floor they know he’s to blame for the curse that’s befallen them, and they want his blood. Now, helped along by some sympathetic villagers, he’s on a frantic race for his life and sanity.

But the road to redemption leads them straight into the mouth of a hellish realm and the arms of an ancient god-benevolent until its rules are broken. And the group will soon find out the cost for… SPYING ON GODS.

Their were a lot of punctuation, grammar, and spelling errors, I almost thought this was self-published, and never edited, which made the book harder to get into.

I honestly wanted to understand the book as much as I could’ve, but it was just impossible.