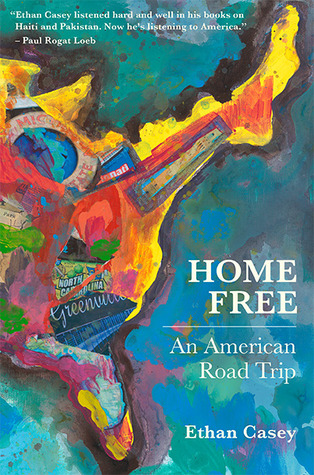 This is the cover 😛

Is there an America? If so, where is it? These questions form the subtext of Ethan Casey’s 2013 book Home Free: An American Road Trip.

Over 3 1/2 months and more than 18,000 miles between Labor Day and Christmas 2012, during and just after the presidential election, Ethan drove clockwise through every region of the contiguous United States, starting and ending in his home city of Seattle. (“I wanted to get out of the liberal echo chamber,” he tells audiences.)

His purpose was to do what reporters and travel writers should do, and what he had done previously in books about Pakistan and Haiti: show up on the ground in person, seek out interesting and representative people, listen to their stories and points of view, take notes, then later sit down and stitch together a coherent narrative.

His intention was to catch history on the fly, and to craft a nonfiction narrative account of America circa 2012 that will echo forward and remain relevant and readable for years to come.

This book was pretty interesting, considering it was all about the United States’ states. (The farthest I’ve traveled was to Virginia) so me hearing about every other state in the U.S I was pretty excited.

But the way the author wrote this book didn’t really capture my attention, and it was suppose to be interesting considering it was about the U.S!!! -sigh- Oh well, we all have non-interesting books that we’ve read out there.