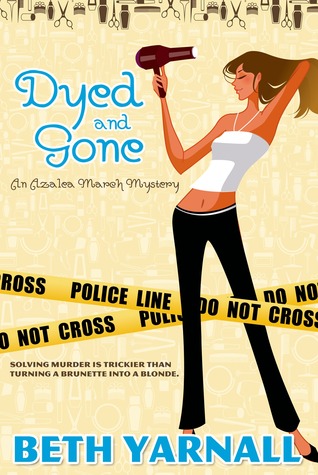 Hairstylist Azalea March is looking forward to a wild weekend in Las Vegas with her friends. Oh, sure, they’re supposed to be there on business, attending the biggest hair show on the west coast, but that doesn’t mean they can’t have a little fun. But fun quickly turns to drama.

On the first morning of the show, Dhane, the biggest celeb of the hair-styling world, is found dead. As it turns out Azalea’s friend, Vivian, not only knew Dhane, but the tale she weaves of how they met is faker than a showgirl’s uh… assets. When Vivian confesses to the murder and is arrested, Azalea knows there’s no way she could have done it and suspects Vivian may be trying to protect someone. But who?

Azalea now has to convince Alex, the sexy detective from her past, to help her prove Vivian’s innocence and comb through clues more twisted than a spiral perm. But the truth is stranger than anything found on the Las Vegas Strip, and proving Vivian’s innocence turns out to be more difficult than transforming a brunette into a blonde.

But it isn’t that difficult once Azalea starts getting into the case, because suddenly, Azalea starts befriending every single person that was connected to Dhane, and connected to the murder case, it bugs some people, but it doesn’t stop her. At one point Azalea was going to get her BFF Vivian out of jail, then not have anything to do with it anymore.

Until, it was too easy and quick for Vivian to get out, because Alex had lots and LOTS of connections.

But when Azalea plans on leaving, she finds out that detective Kennedy and the cops, are still in the same spot as Azalea had left them in with the case. So Azalea starts going all detective again. and finds out who the murder, the suspects, and the stories of why tis murderer did that, and the murderer was right under everyone’s nose…

Yes, I’ll admit, I didn’t really get a lot of the hairstyling terms the characters used in this story, but the characters’ roles, really scratched that off.

And as for the romance? There was both M/M and NA 🙂 And I just enjoyed it!!!
Juan Carlos was simply amazing!!! Him and his ways him liking guys and all I really enjoyed it 🙂 It was sweet and I honestly wanted more, Now I see why my good friend Lola recommends me a lot of M/M romances, there simply interesting, and sweet to read. ❤
Then there was Azalea, and Alex 🙂 There relationship was hot, cold, hot, cold, but it doesn’t mean there isn’t a little steam in there… It will get better in the next book 😉

I am sooooo happy that I won this on a giveaway, because this book was simply AMAZING!!! I finally found another good series!! 😀

Now I know ALOT of stuff can happen if you go for one weekend to Vegas… So if you ever plan on going there, make sure you have a bodyguard or a flamethrower :3