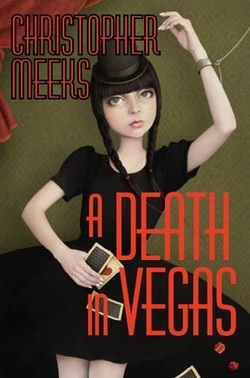 Title: A Death In Vegas

In this book, the president of BenBugs, a company that specializes in beneficial bugs for organic gardening, discovers a young woman dead in his Las Vegas hotel suite.

The young woman had worked as a sexy lady bug at his convention booth. And of course, he had nothing to do with her death. so who did it?

While that was being investigated, the FBI raids his booth on a money-laundering scam that he knows nothing about, either. (This MC was clueless as heck.)

Soon, the coroner doesn’t have good news. The police and FBI are against him. and his wife NOW cannot be found!!! To solve all of these turn of events, he flees to find his own answers, alone, since EVERYBODY is now against him, and think he’s guilty of the crime, and of course, like the genius he is, he has no witnesses, and the evidence points directly to him.

Great, right? So, Patton, avoids a lot of obstacles, and tries to find the murderer on his own.

This books’ suspense, left me at the edge of my seat, I honestly couldn’t put it down until it was over, I was so glad he found out who it was,  and cleared his name, by himself, and proved everyone wrong 🙂 This book had me cheering till the very end!