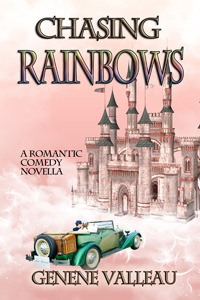 Plot: A hilarious backdrop for the courtship of a young woman who yearns for a “normal” family.

This book is really for little kids, because the writing isn’t captivating, the cover is kiddish, and nothing makes sense in this book. I almost threw this book out the window, to be honest.

This book was suppose to be hilarious, and cute, but it was more, awkward and torture.

I really have nothing else to say, but, tis book just makes no sense, and was just meant for little kids in preschool.

One thought on “Review: Chasing Rainbows”